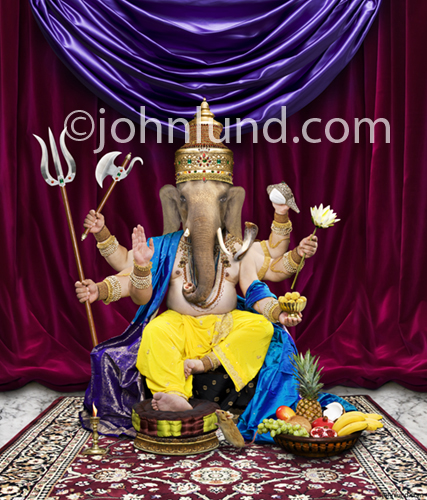 Keywords Associated With This Image

Stories of Ganesha The Lord of Success

The Lord of Success

Ganesha, the son of Shiva and Parvati, and arguably the most beloved of all Hindu Gods, has the head of an elephant, and a huge pot-bellied body of a human being. He is the Lord of success and destroyer of evils and obstacles. He is worshipped as the god of education, knowledge, wisdom and wealth. He rides a mouse, has one broken tusk, and is invariably seen holding any number of symbolic objects including a hatchet, a conch shell, sweets, a trident, and more. He is one of the five prime Hindu deities (Brahma, Vishnu, Shiva and Durga being the others).

Each of His Stories Has Many Variations

How He Got His Elephant Head

As the story goes, Pavarti (Shiva’s Queen) wanted to bathe uninterrupted. She created from her own body and the water of the Ganges, a son, Ganesha. Pavarti instructed him to guard the path to where she was bathing. It happened that Shiva returned from a long absence while his consort, Pavarti, was still having her bath. When he attempts to find her he came across Ganesha who wielded his sword and forbid him to proceed. Incensed, (and unaware that Genesha was his wife’s son) Shiva drew his own sword and decapitated the boy. When Pavarti found out, she was inconsolable in her grief. To right his wrong and assuage Pavarti’s grief, Shiva sent his soldiers to search for a new head for her son. Shiva instructed them to bring him back the head of the first living creature, sleeping with it’s head to the North, that they came across. The soldiers returned with the head of an elephant, which Shiva placed on the body. Shiva then breathed life into him.

Ganesha, the Moon, and a Broken Tusk

One day Ganesha, after having receiving a huge number of sweets from his many disciples, in order to aid his digestion of this incredible quantity of food, decided to go for a ride on his mouse (He always used a mouse for transportation). It was a beautiful moonlit night. During the ride the mouse was startled by the appearance of a snake. The mouse jumped in fright throwing Ganesh to the ground. His rotund belly hit the ground so hard that it exploded open and the mass of the sweets that he had eaten spilled out all around him. Being too intelligent and wise to get angry over the accident and, without wasting any time in useless recriminations, he tried to rectify the situation as best he could. He used the snake as a bandage or belt to hold his stomach in place. Have eliminated that problem, he again mounted his mouse and continued his journey.

Chandradev (Moon God) saw the episode and burst out laughing. Ganesha, having a very short fuse, cursed Chandradev for his arrogance, broke off one of his tusks and threw it at the Moon. The tusk was thrown with such force that he split the moon’s face in two. He then put a curse on the moon, declaring that anyone who happened to see the moon will then have bad luck. When he heard this the moon god understood his mistake and asked to be forgiven. He accepted Chandradev’s apology, but since curses cannot be removed but only lessened, he modified the cure to allow the moon to grow and fade in intensity every fifteen days and anyone looking at the moon during Ganesh Chaturthi would then have bad-luck. Thus is explained why, at certain times, the Moon disappears and then begins gradually to come back; but its face is whole only for short time since the tusk had broken it to the point of disappearing.

he Scribe and A Broken Tusk

Another story of how He came to have one broken tusk. It is said that his single tusk shows his ability to overcome all forms of dualism.

In the Mahabharata an ancient and epic poem, it is written that the sage Vyasa asked Ganesha to transcribe the poem as he recited it. The God agreed on the condition that Vyasa recite the poem without pausing. The sage agreed on the further condition that Ganesha would have to understand everything before writing it down. In this way, Vyasa could take a break from his non stop talking by simply telling a difficult verse which Ganesha couldn’t quite fathom. Vyasa began his recitation, but in the fast and furious writing His pen broke. He quickly broke off a tusk and wrote with it so that the transcription could continue uninterrupted, allowing Him to keep his word.

Test of the Elder

Ganesha has a brother, Lord Subramanya. They once had an argument over who was the oldest (and therefore head of the Gana, the troops serving Shiva). They went to Shiva to find out the answer. Shiva decided that whoever would make a tour of the universe and come back to the starting point first had the right to be the elder. Wasting no time, Subramanya immediately mounted a Peacock and set off on his journey. Ganesha, in his wisdom, circled his parents Pavarti and Shiva, then asked Shiva be announced the elder.

Shiva asked him why he should be declared the elder when he had not circled the Universe. He answered that his parents represented the whole universe so had indeed fulfilled his task. Shiva was pleased and named him Ganapati (leader of the celestial armies) and Vinayaka (Lord of all beings).

He is the remover of all obstacles, the lord of success, and whose statue adorns the homes and offices of not only millions of Hindus…but of my own office as well!

Keywords Associated With This Image